Bio of Geoff Ramsey: Age, Family and Net worth 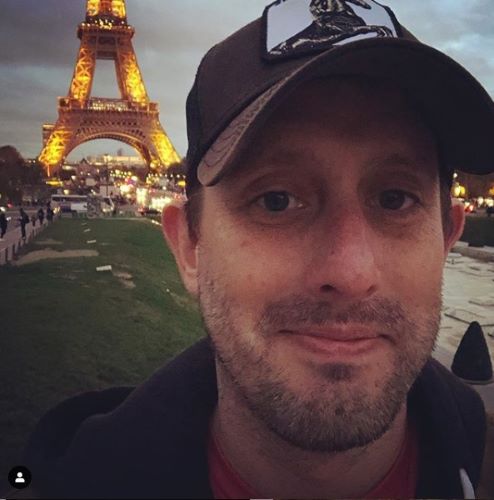 Have you heard of internet celebrity Geoff Ramsey? Who is he? Geoff Paul Rink was born in Mobile, Alabama on June 19 of 1975. He spent his childhood and teenage years between Alabama, Florida, and Louisiana. He went to school (elementary and high school in Alabama). After some years he changed his surname to take his stepfather's, Ramsey. While doing that change, the court informed him that it would cost him nothing more if he wanted to change something else about his name, so, as a joke, he changed his middle name to "Lazer". That's why he is known as Geoff Lazer Ramsey.

During his last year of high school, he enlisted in the US Army and joined the training camp at an installation in Fort Camp, Columbia, South Carolina as soon as he graduated high school in 1993. He served in the Army for 5 years, mainly as a photojournalist in Kuwait, he then was stationed in Texas at the US military post located in Killeen popularly known as Fort Hood. During his last year of service, he was stationed in Fort Monmounth. 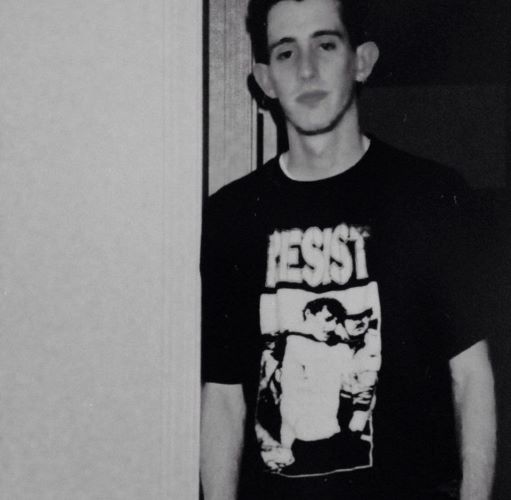 After finishing his service and leaving the military, Geoff tried his hand on a number of things. First, he went to work at a tech support company called TeleNetwork Partners. Here is where he met Burnie Burns (who then became his partner), together they have done some great work, the first was seen when they teamed up with Geoff's best friend, Gustavo Sorola. They created a website called drunkgamers.com and they put Burns in charge.

Geoff also tried his hand at other jobs like being tech support for Catch 22, an East-Brunswick American ska punk band, he traveled with them on tours. He also worked as an assistant producer for View Askew Productions, a filmed company owned by Kevin Smith. The experienced gained during this time was what helped him start his own company. 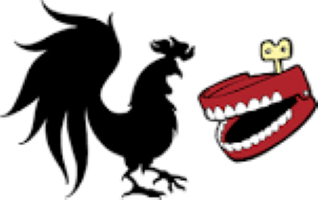 Geoff started Rooster Teeth with his friends Bernie Burns and Gustavo Sarola (the company was also founded by Matt Hullum, Jason Saldaña and Joel Heyman).  Rooster Teeth was originally named drunkgamers.com, a website that reviewed various video games. They had to change the name because it was unprofessional (also because nobody was going to fund a company that had the word "drunk" in it, said Geoff). They settled on Rooster Teeth.

The first production of Rooster Teeth was a science fiction comedy originally called Machinima Series (co-creation of Geoff and Bernie Burns). The series was then dubbed Red vs. Blue: The Blood Gulch which it's still in production and is the longest running web series of all times (almost 16 years, production started in 2003). Geoff is the one that voices the popular character Dexter Grif. This is where Geoff became an internet celebrity. 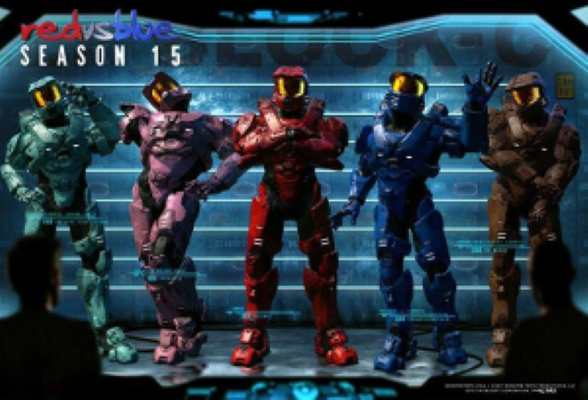 Geoff also started and runs another series called Achievement Hour, which he co-hosts with Jack Patillo. The series showed the audience how to earn Xbox achievements, was very popular because it focused on showing how to get the most confusing and difficult achievements. The focus of the series has shifted and now it is more like a comedy where they show "Let's Play" videos and humorous commentaries.

He has gone and produced multiple series for Rooster Teeth and has also voiced a range of popular characters like The Omnipotent Voice in the machinima series. Thanks to all his producing and voice over acting he has a net worth of $3 million dollars.

Geoff married chainsaw carving artist, Griffon O'Connell on June 2, 2005. They met on a blind date, Geoff said in an interview to Brit.Co that he had canceled on the date two times before they actually went on a date. That date lasted 12 hours where they had lots of conversations and exploring of their hometown (as a married couple), Austin, Texas. The main base of the attraction for each other was their shared sense of adventure.

She is a well-known chainsaw artist and is known for her pop culture wood sculptures that have appeared in the Australian Chainsaw Championships as well as the Buttler Chainsaw Carving Invitational. Her Youtube videos or her work have attracted a lot of viewers and subscribers. One of her most view videos is the one where she sculpted an Eastern red cedar into Groot from the Guardians of the Galaxy movie.

She has a creative venue called FORT for, in her words, "carving a pit in the edge of town". She uses the internet to showcase her work and show it to the world.

Related Article: Jake And Maggie Gyllenhaal: The Most Adorable Siblings In Hollywood 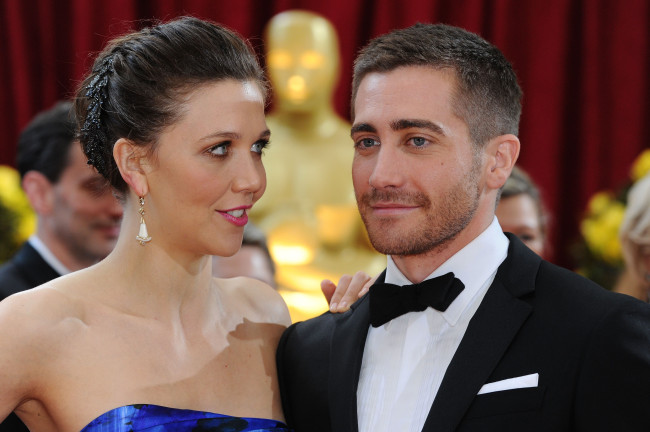 Both the Gyllenhaal siblings got their start acting in the 1990s with the help of a special connection. 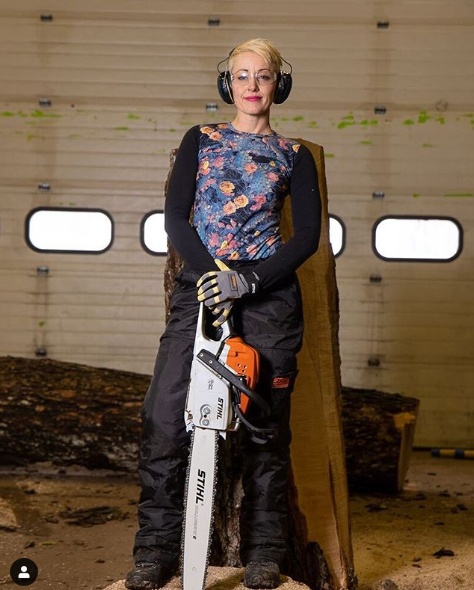 Geoff and Griffon have a daughter, Millicent Ramsey (Millie) who was born on September 23, 2005. She, now 13 shines on its own. She is a successful Youtuber and internet star. She has participated in well-known series like the Sims sisters in which she played with her nanny Chelsea. She co-hosts on a collaborative channel (with her father Geoff), name Game Kids.

She now co-hosts also with Geoff, a new series for The Rooster Teeth called Schooled. The series features a team of young children gamers and has a family-friendly tone. She says, she likes working with his dad because she can learn a lot from him and what he does. With this show, father and daughter hope to make parents see that games could be a family-oriented activity. That kids and parents could play video games together to create bonding experiences among them.

As a couple, Geoff and Griffon teamed up to create a podcast that still runs on Rooster Teeth, called Relationship Goals. The name was inspired by the hashtag that their online community often assigned to the couple. The podcast was launched in February 2017, the Ramseys wanted the podcast to be a platform where couples could celebrate all kinds of relationships.

Geoff and Griffon's family structure was always an unconventional one. It was not the "ideal" relationship; they both traveled a lot, independently, because of each other's work, so they spend several weeks apart during the year. There was always one of them with their daughter Millie in their hometown. It was like this for a long time, but they made it work because they had an unconditional partnership and they supported each other's work.

That's why when after 12 years of marriage, Geoff and Griffon announced via Twitter that they were getting an amicable divorce, their online community was caught off guard. They couldn't believe it was true. Both Geoff and Griffon confirmed the news via their social media and the divorce was final in April 2018.

His tattoos and their meaning

One of Geoff's trademark is his tattoos, he has his body full of them. One of his most famous colorful ones and a favorite among his fans is the one he had done on his left leg. It's a very cool design of a griffon with a chainsaw. He didn't say it, but it was kind of obvious that it represented his then-wife Griffon. A very original and colorful tattoo. 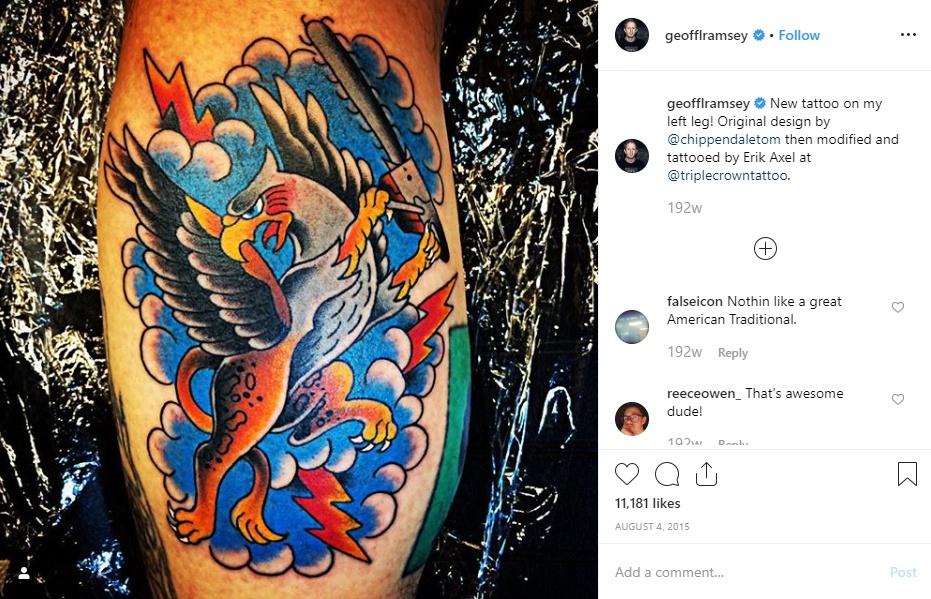 He has a friendship dagger on one of his arms. The tattoo lovers and Geoff think that it is an awesome design. What do you think? 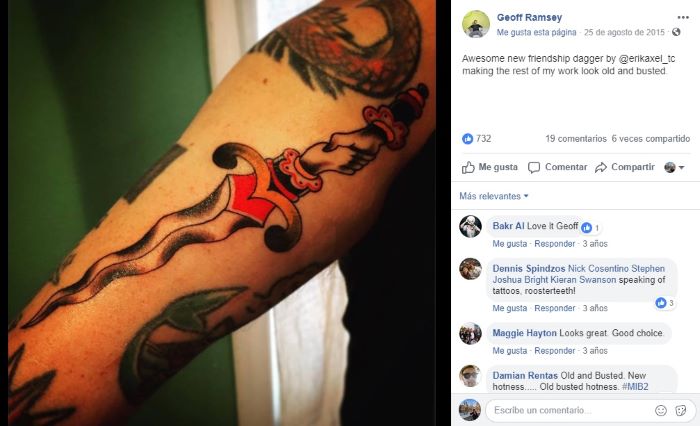 He has a very cute tattoo on one of his legs of a blue duck. Some say it represents his daughter Millie. He says in the image caption that he "always wanted to see a blue duck". His fans loved it. 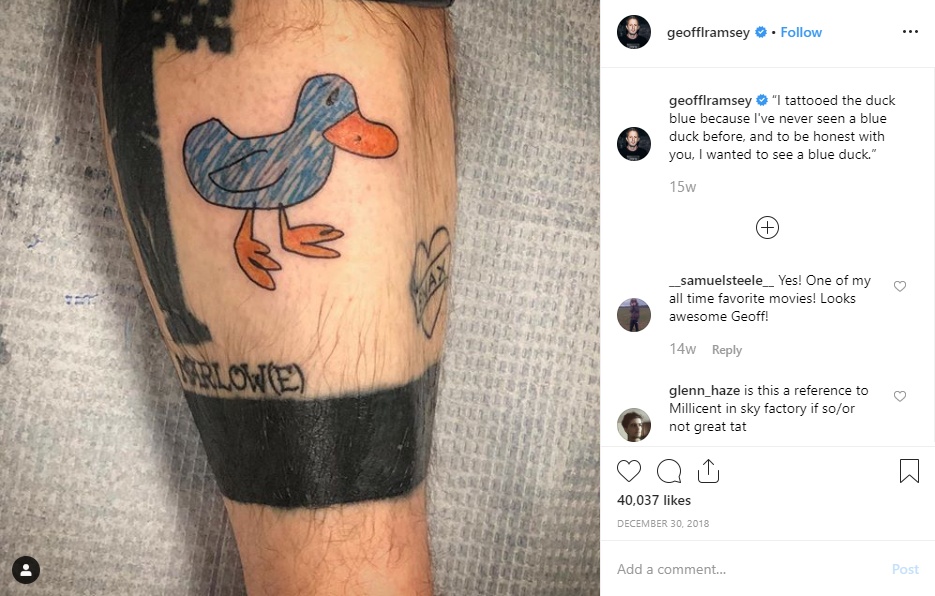 He has his chest full of tattoos too. Under each nipple, he tattoed the words, Milk and Shake and in between them, he got a design with a skull with wings. We guess he had to have himself waxed before and indeed that most warrants an Ow. 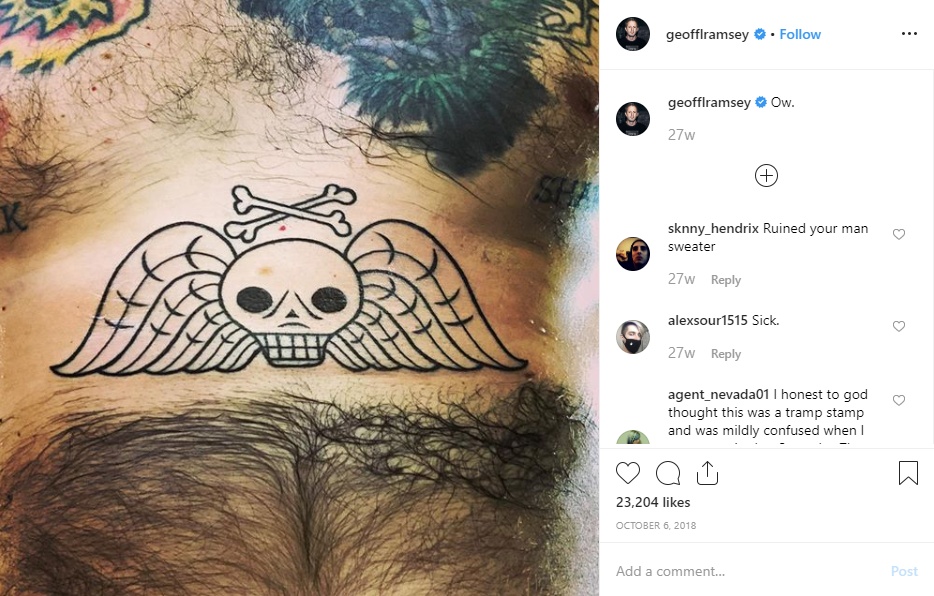 This is the most recent tattoo that Geoff added to his collection. Apparently, he still had some space on one of his legs. 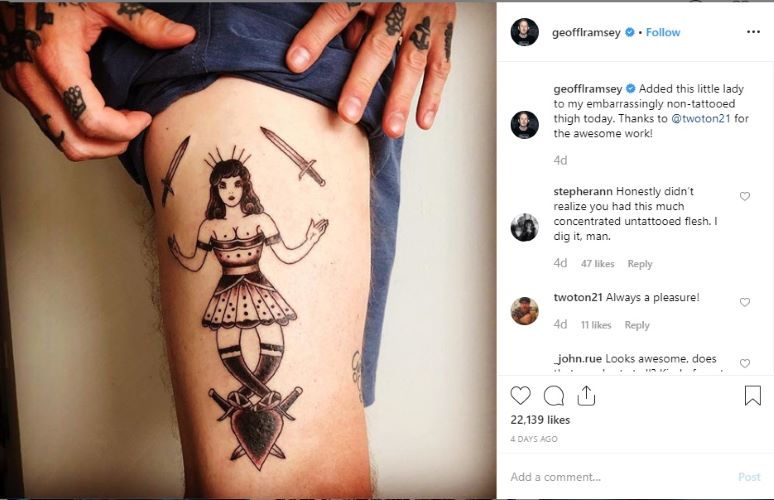 Geoff Ramsey is quite the character, he has gained his fame and fortune by being himself and doing things he enjoys and is good at. He formed a very interesting and unconventional family that also bring joy to his life. He isn't afraid of taking risks and continues to delight his fans with his shows and his tattoos. 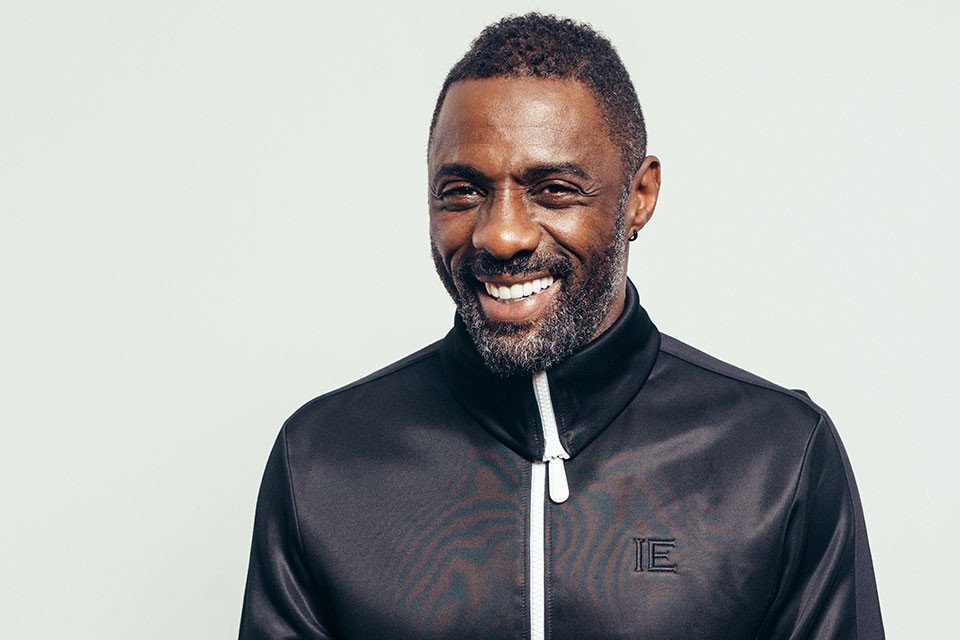 Don't get fooled by the tough guy image Idris Elba wears on screen!